This post has been published by me as a part of the Blog-a-Ton 28; the 28th Edition of the online marathon of Bloggers; where we decide and we write. To be part of the next edition, visit and start following Blog-a-Ton. The topic for this month is 'BLANK PAGES'.

The journey had reached its lowest point where every caravan of the lost Tajiki jumla had exhausted their reserves of food and water; the camels had only to travel a few more paces before their legs gave way and tumbled to the scorching sand in a heave of lifeless mass. Each parched throat had just one prayer to Allah; not to make a blitzing trade or even to preserve kith and kin but simply that if this moment they were to breathe their last, it be with a view of flowing shimmering water.

Sometimes it so happens that your dreams pray themselves to life and as their teary vision met with the scorching horizon, what greeted them was a sweeping view of lush green trees. How such vegetation in the middle of a desert could thrive was far from anyone’s concern. Renewing their lost vigour and making every attempt to survive simply until the last few miles, limping and very nearly giving way they touched the periphery of the Land of Kisva.

As the tradesmen sauntered into the land through a magnificent arched entrance, facing them across was a fort like carevanserai where toddlers in white caftan’s whistled and climbed each other’s shoulders to resound the gong overhead in order that the inmates be informed of their new visitor’s arrival. They then offered the forlorn travellers a lemon coolant from quaint crescent shaped pitchers and their every action followed a pre- instructed pattern. Still more children in the same attire followed; while some helped the jumla unload their belongings, others help set the dashtari in the main courtyard for their evening meal of oats, bread and meat.
It was like a non functioning unit had suddenly sprung to life.

Once they began to settle a bit, the tradesmen inquired from the children about their surroundings, who the fort belonged to or how far away from Misr they had drifted. Although there was a member of the tribe who understood almost all languages spoken over the breadth of the trade route, nobody seemed to understand the dialect the children spoke in and confusion prevailed.
Since there wasn’t an immediate solution and in the hope of meeting a knowledgeable adult or caretaker of the fort the next day, the tradesmen worn out from travelling for days, let down their worries and rested for the night.

As they arose next morning, the situation didn't seem to change . The children tended to all their needs, provided timely food and looked after the livestock but there seemed no sign of other people in the fort. The chief of the tribe appointed from among them a group of people to search the fort and its surrounding areas for any other folks besides the children. Futile the search ended almost immediately as they could not even manage to identify the exit of the fort.

The chief then held a meeting that evening calling upon everyone to replenish their resources over the next day and leave since they did not wish to disturb the unknown host any further. Also it was settled that each tradesman would give to a child one prized item from his fare as a mark of gratitude for their hospitality.
In the meantime, one of the little boys stared intently at a golden falcon that belonged to a tradesman, Zaid. It was only fitting he offer the child the falcon. However misunderstanding it for a bargain, the child handed Zaid a small striped pearl and ran away with the bird perched on his shoulders. 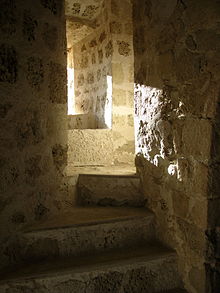 In an attempt to return the pearl, Zaid followed the child but could barely keep up to match his quick, lithe footsteps. The child ran in and out of open and shut doors, advancing into a steep downward staircase that panned out to a barren shore overlooking a vast expanse of moonlit water. Here was something to marvel at, except this wasn’t all. The child ran still further along the shore and suddenly disappeared into a cave like shaft. Zaid lost sight of him but continued into the cave now fully spellbound by what was to unfold. Lit with torches of fire, the cave resounded of a faint song and with each advancing footstep through zigzag corridors, the melody grew louder.

At what appeared a dead end, there opened a window. Whether it overlooked land or water he couldn’t tell, because that moment, staring into his face were a pair of deep sad eyes of a mermaid, and in place of tears there was a string of little pearls on her cheeks.

It was the most beautiful face he had ever seen. Or her eyes set a plunging seer in his heart.
I wish I could tell you something as animated, except such a thing never happened. He was at a loss to understand a face that was like a blank page. Not that he couldn’t withhold or remember it.
But simply for he couldn’t tell his perception at what he saw. It was almost like seeing a reflection of oneself. The contours he knew, but put at par on a level field, he couldn’t judge.
A second later the song was silent, the lights dimmed out and he was lost. Fumbling, he found his way back to the fort.

Zaid lay thinking about her face all night. He feared he would forget it. Every face he knew suddenly seemed to resemble hers. He had to see her, listen to her story and there seemed no second way to be happy again. He tried to retrace his route from the previous night and reached the shore but couldn’t find the cave. He looked and looked some more but it wasn’t to be.
It was time to leave, and as his companions loaded their caravans a deep melancholy set within him. It was a moment of fear and loss but there could be no thinking. Plain as chalk he couldn't go.

One of those days he was going to marvel at how naive he was. He was going to find out her face wasn’t a blank page after all. It had citrus splurged all over it. Invisible to all on dry parchment, but when held to a candle it unravelled a mystic print of its own. Every day he would turn a fresh page and attempt to read of the magic it withheld. It would narrate of soulmates and a way of life so enchanting, you would be awed. I wish you knew.

On another note, it must be told there never was another boy in the Land of Kisva who asked from another tradesman anything in exchange of a striped pearl again.


The fellow Blog-a-Tonics who took part in this Blog-a-Ton and links to their respective posts can be checked here. To be part of the next edition, visit and start following Blog-a-Ton.
Posted by Sadiya Merchant at 11:44 PM

Mysterious, philosophical and captivating...a hint of Arabian Nights and a pinch of Paulo Coelho here and there...not to forget truly poetic language...

This is a wonderful piece of writing !

I only searched for you in participant list to find out what you wrote. But I am missing your previous style, less in verbosity and compact in nature, imagination & thought. Like what you did with blurs & bends.

"It was almost like seeing a reflection of oneself." one amazing thought from your treasure.

oh girl... you spoiled my post :( i was about to write a post ...WANTED...dead or alive...aur then i had thought of a few bloggers who disappeared and i thought maybe somebody would have an idea where they have gone..but now you returned...and what a marvelous story..i love the stories about caravans, egypt and the desert and these tales....thoroughly enjoyed... :) thanks for such a beautiful post :) have a nice week :)

right you come back with a bang i guess .. a lovely story

pearls, lovely naems too Zaid.. Forts .. caravans and the land of Kisva
beautiful .. loved the story

but oh i already said that again
Bikram's

That was tempting and mysterious !
Liked the description and everything :)

Wish you all the best dear!

The post brought forth some memories and made me re-open another post I had once read. I do not want them to influence my thoughts on your Blank Pages so will come back soon times.

PS: I also have loads to catch up on (wrt your blog).

The secrets are meant for a chosen few, I guess, he was the only blessed soul.

All the best Sadiya!

You post reminded me of Brijender's story of the mermaid. I think you must have been influenced by it. Nice dreamy, mysterious narration.

Your writing continues to adore me and interest me as and when I pay a visit. Excellent narration. ATB for the BAT.
P.S. It does remind of a similar story but then I believe one can have separate influences yet similar results :)
P.S.S.Still a lot to catch on your blog , would be doing that soon

One of the better posts that i saw on this topic. I am a fan of narration and this one was just perfect. I am going to read all such posts on your blog in full.
All the best for BAT

That took me to a totally different world . Wonderful writing . It did remind me a little of Paulo cohleo . Loved it :)

Hey Sadiya
Brilliant written and poetic narrative that kep bloggers glued to it:)

any plan to return back to blogging?

Thanks for introducing me to frank Sinatra's strangers in the night --- :)

Heya! Haven't read anything from you in a while.

I've been contemplating writing something but cannot seem to bring forth the 'perfect' idea; care to guide?

Hi Sadiya, please come back and start blogging again. I found your blog just 2-3 days back and I have read almost all of your posts. I am afraid there are only 10-15 posts left to read. I LOVE your reading style and I don't know what will I do when I finish reading all your posts. Please come back and start blogging again for my sake. Sachi mein I feel like to make you my bestest friend. You have an amazing sense of humor girl. I tried searching you on facebook too, so that I can atleast have your status updates if not these posts.. bt could not find you. :( And yes I am not stalking you. I just love reading you. xx :)

http://sameoldnewstuff.blogspot.in/2013/12/guess-who-came-along-liebsterrrrr-yayyyy.html - a lil surprise for you