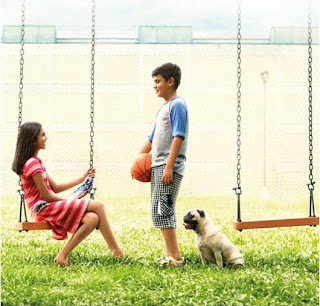 Now I don’t know how long ago it was, so I’m guessing it would be safe to say, Once upon a time, in a land rather close to where I live, there was a beautiful princess named Laali *definitely more beautiful than the Fair and Lovely wali Didi, far more than Sonakshi Sinha and a little less than Katrina Kaif. You get the idea right?*. So yes, there lived a beautiful princess in a small castle *space constraints in Mumbai yaar....samjha karo!* with her evil ‘Baa’ and two vamp like ‘Jeeji-saa’s’.

As you may imagine, she was made to do all the household chores straight from cleaning her room, folding her hundred gowns to replacing her stilettos in the shoe rack. And if that was not bad enough, she even had to help herself by putting food on her own plate! Baa examined her every move making poor Laali miserable with the ever taunting monologues of ‘Hey Bhagwaan! Sasuraal main jaakar kya karogi?’
So great was the torture Laali was made to endure, that she wasn’t even given a landline in her own room with which to connect to the internet and meet her Prince charming online.

Oh yes, I didn’t tell you about Prince Billowy. He was her blue-eyed hero, from the neighbouring country-that-must-not-be-mentioned *lest the Government thinks the narrator of this story is a terrorist or something* Well the Prince studied at a hi-fi college abroad and could barely afford to keep up with his family expenses despite his part time job at McDonalds. However if you must know, he loved Laali dearly. Now if only they could find a way to communicate, their long distance louvve story would be perfect.

The least bit of freedom Laali got was when Baa allowed her to use the wireless Relencia Net Connect. It is hardly a matter of surprise that she was allowed such a blasphemy because the company was owned by her rich and powerful uncle who spelt evil with his impossible to understand schemes, together with his sugar coated philanthropic wife. Laali was terrified of the duo, but this wasn’t quite the time to take sides.

As Laali held the Relencia Net Connect, tears of joy ran down her cheekoo face from the apprehension that surfaced on how she would greet her most adored Billowy.
Alas! This happiness was short lived. No sooner had they exchanged a few coy hello’s on Yooha! Messenger, her connection died out and no amount of reconnecting got her back online. She tried and tried and so great was her sadness that it accidentally made her hit the antenna which broke. Well that was the end. Neither sobbing, nor pleading at the customer care office would get them to fix the damn thing!

Her life was filled with sunny days of long chats over mobile Yooha! Messenger to conversations over Spyke. One click on her phone and they wrote on each other’s Wall’s, poked each other, played Scrabble, shared pictures and even live-tweeted their routines on the move. Staying connected was the key to their relationship.

When Billowy’s birthday arrived, Laali fretted over a funky-shunky gift to give to her sweetheart. Yet again, Vodafone Godfather came to her rescue by announcing it’s free for a month 3G internet service. So in the nick of time she made a video with red hearts, teddy bears and balloons that read soppy messages  *the kind of silly stuff that lovers find cute* and uploaded it over mobile Youtube. She was panic-stricken over how long it would take to upload but courtesy its 3G lightning speed, the video was uploaded even before the clock struck midnight. Oh so happy was Billowy that he immediately updated his Facebook status to ‘In a relationship with Laali’. I hear due to heavy traffic of comments on his page that day, his account was blocked.

And that’s not all. When Billowy came down with his Daddy dearest on the pretext of a vacation, Laali’s tinku jiya began to flutter again over how she would manage to have glowing twacha. Well well! No sooner had Voda Godfather heard this, he reduced his mobile internet tariff to just Rs.30 a month! With an hour of splurging the saved moolah on her Aloe Vera Ph-free, Sh-free Facial, she looked no less than an angel from heaven above.
The way things are going, with Voda Godfather’s aashirvaad, I presume this is going to be yet another happily-ever-after tale!
Tathaastu!
J

lol @ the names you've given to all of the services and companies. Yooho! Messenger? lol.

All in All, Very well written nonsensely story. :p

Where were you all these days? No posts, nothing!

Very nice post!!!! All the best for the contest

and i was wondering where did sadiya vanish? glad to have u back ( if this is really a comebk post).
now on the post..omg! those pseudo names made me laugh so hard! awesomee:D good luck to u!

How I missed your blogs !!!
Enjoyed the post to the core.
Welcome back !!!

I can either laugh or write .. so I will do the former and have a hearty laugh ..

Thank you so much

and hey all the best for the contest If i was a judge I will be giving this the first prize for sure :)

and good to see you back ..

Hahahaha, this was so good :D
All the best for the contest!
Also,I <3 your header!

@ rinayaaaa- thnx so much. n a belated happy bday too. sorry hum too late ho gaye :(

@ blahblaholic- thnx so muchh!! credits to picknik. bechaara closed down just a week aftr i created it :o

Sweet, cute one...I am promoting you on indiblogger.

If u get a chance to read my post, do gimme ur feedback :)

before commenting on the post first you reply me..where have you been this whole year? tell tell tell me... and the next time you remain absent for so long, i am going to expel you from blogger :P


ahahahaha...i think you should go to ad business, hope you will make new cool creative ads :)

Well all d best for the contest !

I wonder what all people can write to win a contest!! You could have given a long advertisement warning in the beginning? But then, I should admit that even though it doesn't qualify for a blog post, it was a creatively written ad! :)

Good morning how are you?

My name is Emilio, I am a Spanish boy and I live in a town near to Madrid. I am a very interested person in knowing things so different as the culture, the way of life of the inhabitants of our planet, the fauna, the flora, and the landscapes of all the countries of the world etc. in summary, I am a person that enjoys traveling, learning and respecting people's diversity from all over the world.

I would love to travel and meet in person all the aspects above mentioned, but unfortunately as this is very expensive and my purchasing power is quite small, so I devised a way to travel with the imagination in every corner of our planet. A few years ago I started a collection of used stamps because trough them, you can see pictures about fauna, flora, monuments, landscapes etc. from all the countries. As every day is more and more difficult to get stamps, some years ago I started a new collection in order to get traditional letters addressed to me in which my goal was to get at least 1 letter from each country in the world. This modest goal is feasible to reach in the most part of countries, but unfortunately it’s impossible to achieve in other various territories for several reasons, either because they are countries at war, either because they are countries with extreme poverty or because for whatever reason the postal system is not functioning properly.

For all this I would ask you one small favor:
Would you be so kind as to send me a letter by traditional mail from Saudi Arabia? I understand perfectly that you think that your blog is not the appropriate place to ask this, and even, is very probably that you ignore my letter, but I would call your attention to the difficulty involved in getting a letter from that country, and also I don’t know anyone neither where to write in Saudi Arabia in order to increase my collection. a letter for me is like a little souvenir, like if I have had visited that territory with my imagination and at same time, the arrival of the letters from a country is a sign of peace and normality and an original way to promote a country in the world. My postal address is the following one:

If you wish, you can visit my blog www.cartasenmibuzon.blogspot.com where you can see the pictures of all the letters that I have received from whole World.

Finally I would like to thank the attention given to this letter, and whether you can help me or not, I send my best wishes for peace, health and happiness for you, your family and all your dear beings.

nicely written...
humour was there yet it was quite captivating... keep enjoying and keep writing...

Wishing U and UR family a very Happy New Year!