This post has been published by me as a part of the Blog-a-Ton 21; the twenty-first edition of the online marathon of Bloggers; where we decide and we write. To be part of the next edition, visit and start following Blog-a-Ton.

Hideous! - That was the word.
Didn’t look anything like a cat. Its ears stood out awkwardly, blue eyes spelt evil and a voice that was enough to make one think of wailing babies and all the wretchedness of this world stemming from one little throat; if you called the skinny thing a throat at all!

Did you know, in Samarkand little hearts are never, never, broken?

Sarah had been terrified of it from the day the creature had arrived. Created quite a flurry, the little one had. Something so ugly didn’t deserve to be looked at for more than a few seconds. The neighbours had named it Genghis. Its evil face evoked the same emotions as the forbidden ruler. Sarah had wanted an adorable little pet that could be looked after and cared for. This poor excuse for a cat didn’t quite make the cut. A rabbit may have been better perhaps.
But you know, in Samarkand little hearts are never, never, broken.

In the course of the next few days Genghis persistently followed Sarah everywhere until it was impossible for her to avoid it anymore. Once she let her guard down, their tryst was a bond of affection for life. Genghis became an attention seeking star who demanded every trice of her time and simultaneously climbed to being the centre of her universe. The neighbours continued to despise it but she and Abu, her father, grew to love the cat as family.
Those were good times.

Then came the other day.....that changed everything.

Sarah’s father was a craftsman who had fallen to hard times and couldn’t quite afford a livelihood very well. He sold all the furniture to sustain their daily needs and when that too didn’t suffice he had to look for other ways. That was when someone suggested he sell the cat in the Samarkand bazaar. In light of the desperate situation, this was a blow that had to be endured. Sarah was distraught.

Her most precious little cat was going to be taken away. The one with whom she had shared a hundred secrets, fed a thousand meals, heard a million yelps and sometimes just understood in stark silence. Her best friend.
But you do know what they say, right?
In Samarkand little hearts are never, never, broken.

Sarah walked on for miles into the arid city with her father to the bazaar outside the Registan Madrasah. In the sun, there flocked sellers from all over Uzbekistan with every article imaginable. From fruits to carpets to even slaves; if you wanted something there was an auction for it. To imagine her Genghis would belong to someone who believed in such a hideous display of wealth made her sick. As Abu stood to announce the sale of his cat, a few spectators gathered. They looked on with disgust at the dark ugly creature. Several hours passed with no one even enquiring for the price let alone an auction or a bargain. Secretly Sarah was happy. Maybe she wouldn’t have to part with Genghis.
After all, in Samarkand little hearts are never, never, broken.

Once the afternoon prayer concluded, the traders got their articles in order and a middle aged trader from Tashkent stopped to look at the cat. One look into its shiny blue eyes and he was enraptured. A crisp conversation with Abu, and the deal was struck. He paid the money and extended his hand to take the cat from Sarah.

As she held on to its rusty fur tightly, her heart melted quicker than ice on a desert rock to the soreness of parting. Her vision blurred and tears stung her hot cheeks. One swift grasp and he had taken her friend. Gone forever. She turned away to look at the haunting Registan square. So much blue dwelled in it. Every shade, from the pale hues of the sky to the deepest overtones of indigo reverberated. A marvel some may have said, but to her it was revolting. It would always remain the dreary place that had snatched her dearest companion. She searched for the shade that matched Genghis’s eyes but the sun played spoiler until her eyes hurt to stay open. 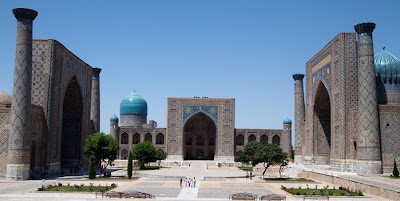 Abu clenched her hand, lifted her on his shoulders and wiped her tears. They would have another beautiful cat very soon. But she knew there never would be anything as wonderful as Genghis. Her Genghis.

And for the first time in Samarkand ever, ever, a little heart was broken.

Dawned yet another day.
As she lay glumly on her bed, Sarah felt a slight tickle on her feet and she got up to face a little cat jumping up to her cot to touch her feet with its paw.

The Tashkent trader had returned Genshis to Abu.
'Hideous!', his family had said it was.
Well you never should have doubted when I told you;
In Samarkand little hearts are never, never, broken.


The fellow Blog-a-Tonics who took part in this Blog-a-Ton and links to their respective posts can be checked here. To be part of the next edition, visit and start following Blog-a-Ton.
Posted by Sadiya Merchant at 11:22 AM

What a heart wrenching story....Good luck for Blog a Ton

Beautiful story. Actually first time I am reading a proper story. You have managed it real nicely. I might even vote for you if I manage to particiate which looks very unlikely though. I seem to be out of ideas on this topic.

Nice story. Sarah must have been so, so happy.


But one thing still eludes me.
The deal went off? Or did the trader let her father have the money and the cat too?

forgot to mention lovely use of this phrase
"Did you know, in Samarkand little hearts are never, never, broken?" throughout the article

very very nice story! and the cat was finally returned to the girl!

And it seems u have read the bartaemeus series a lot :P

Read mine at The Other Day

touching and mesmerizing Saidya.. I always love your writings.. Looking forward for you take on 'Nature'.. Your silent ardent follower.. All the BEst.. Wanna know what happened the other day?

You do have a nice flow of words coming out there. I did hate Abu with the same fierceness that the little girl did, and it is awesome to know that u made ur reader feel so. N I totally did that name. Genghis! All the Best for B-A-T

Nicely written and your choice of words are something I will remember for long. One of the best I read so far. Good job!

Very well written !!
VERY well indeed-liked the choice of names, the storyline and above all, the decidedly mature flavour of the entire piece.
Though i must say it was quite a contrast from your usual chutzpah !!

awww..that was soo beautifully narrated story of a land where little hearts weren't broken ever :)
I loved the way u tangibly depicted the entire market scene word by word. and ofkors i loved d fact that such a sweet girl shared my name..most wonderful tribute..thnks a lot:D
ab humari to yahi dua hai ki aap hi jaatein!

@ sunwicked- hie!!! hehe wel as of now u win urself an exclusiv comment. yayyy! :)
*main bataa doo its a bigggg deal. only one in 5 ppl get it :P*
u kno even i was wonderin who d 100th isspeshal person wud beeee!
welcome to d blog. kuch thik-thak nahi lagey to bata dena.
also, m really glad u liked d post!
keep smilinnnnnn :)

lovly story which has been told very well :)

@ aashish- ahem. bartaemeus. a lot.
*sad eyes*
i don even kno wat it is.
however googl baba sez its like arabian nites in wich case its rainin hrts at my end.
arabian nites is my fevretestttttt book of all tym. if i got it wrong den well- poof! :D

@ the other sarahhh- heyyyyyy! finally uve read it. bt i mus say it was supposed to b a surprise. as in u wud write fr d frst tym n visit mine n get a shockk shockk wala surprise.
sab popat ho gaya :o
neway glad u like it n nt suein me or nethin.

ohhhh sad very sad ... poverty makes one do a lot of things .. and the little heart was broken .. wish such days never happen to anyone .. and no heart is every broken

Beautifully crafted story, nice flow to it and dare i say better than the previous one.

Beautiful! And I'm speechless. After all, In Samarkand, little hearts are never, never broken!
Good luck! :)

Though it'd be great if you stopped by to see what happened to me http://utopian-nadir.blogspot.com/2011/06/other-day.html

Nice end. i thought it would go otherwise due to the build up befoe but hey happy ending :)

Though choice to make--- wife or Peace of mind...
Find out what happened - The Other Day on my blog -THE SILENT WORDS

I love stories with happy ending :-)

@ nikhil- nooo i don like roni stories. d build up was jus to keep a rollin rythm so u don run away midway :D

interesting story :) all the best

beautifully narrated!
the repetition of the line-"In Samarkand little hearts are never, never, broken." added an extra appeal to the entire story:)

My kitten was taken away and I know how it feels to have a little heart broken. :(

Such a puerile flow of words.

A very few of blogs I have ever read, actualy a very first indeed.Realy do not know how to react.. it was nice, it felt like reading a fairy tale in the early school days.

Rightly said a good use of grammar,can oly say that as i had to give a re read to lot of

Nice to see myself sit and read.. somethin I always ran away from throughout my life.
Hope I'm inclined to it for sometime atleast

@ aadilll- hehe giv a re-read to lot of....wat!
honestly m not even worried abt d inclination part cos d strt itself has taken me fr a bit of a shockk! :P
nice of u to drop by.