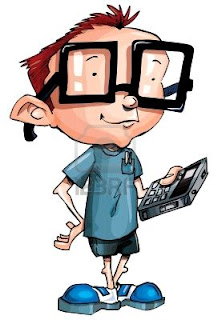 In the land of Bigshow, the king, there lived a boy named Jhopu. Now Jhopu was the typical geeky chap you would meet at boring science exhibitions. He religiously got up at 4 in the morning, had a shower, oiled his hair with Para-glide coconut oil, rehearsed Carnatic-i music from Shri Shri Navi Kankar CD's for an hour and studied for the rest of the morning until it was time to leave for school.

At school he was the brightest star in his class. From the value of pi up to 15 decimals, to the toughest trigonometric formulas, he knew them all by heart. This was his life and he loved it. At least such was the case until something big happened.

As he walked into class one morning, rumours of a princess joining their batch floated like wild fire. He scowled at his classmates for wasting their time over silly girls who knew nothing but to giggle or cry in the most dreary voices imaginable. What they actually ought to be doing, was divert the same attention to Nano-Noetic science and device a machine that combined all happiness molecules distributing them with varied proportion to eventually attain world peace!!!
*sigh*
Somehow girls could always be tracked down as the root of all global problems.


The bell rang for class to begin and entered what appeared to Jhopu an angel divine. Never before had he seen anyone with prettier braids or cheeks as white as Amul-ya milk. Her specs were even more round than the roundest roti’s his mom had ever made. To compare this stranger with his mom sure was a huge leap. The irony of it all, Laali was a princess and he was but an ordinary commoner. From the reaction of his classmates who gasped and gaped at Laali, he immediately understood that there was plenty of competition in the arena. However he mustn’t lose hope. Thus started a series of attempts at flooring the lovely princess.
﻿Now luck had so ordained that the teacher too signalled the princess sit next to him. So thrilled was Jhopu, that he almost forgot to breathe for a couple of seconds. Laali fumbled in her bag for a few minutes to find her pencil with no outcome. Being the hero, with Superman-o like deftness he held his Apsara-ya pencil for her. What a fitting name for a pencil to be given to its sobriquet holder. She flashed a toothy smile that had a neat line of braces and instantly his heart leapt like a Ferrara. Throughout the class he couldn’t concentrate on anything but the squiggly handwriting of Laali learning every twist and turn like it was carved on his heart.

Giving a pencil however wasn’t enough. He needed to do more than that, to gain her attention and more importantly affection. He thought and thought until his hair oil dried out and yet no trace of any hard hitting idea. He recollected all the ways his classmates had used to charm the so called less pretty girls. He looked for inspiration from the clean blackboard, to the bunny on his tiffin box, to his neat black Bataata shoes but nothing seemed to ignite a strategy. And that’s when he had the stroke of a sudden brilliant idea. The idea that can change your life- or at least in the words of the very famous Abhicake Makkhan!

What the idea wasssssss, I’m going to tell you very soon of course.
Until then, leave your imagination to freefalling mode ki boss, Sangam hoga ki nahi!

To know more about my heroine Laali's story until just yet, click here.
Posted by Sadiya Merchant at 4:03 PM

OMG THIS IS TOO FUNNY. i love how you described everything :D

"Somehow girls could always be tracked down as the root of all global problems."
HAHAHAHAHA SO TRUE!

can't wait to know about the idea :O
and Laali is so funny-looking lololol

Jhopu and Laali seem just made for each other..Thoguh Jhopu resembles a bit of Sheldon cooper of Big Bang Theory..

Holding breath for the next part, do not keep us waiting for long:)

he he he he .. I am sure thats wht happens if eve had not eaten the apple maybe world would be different .. I liked the line global problem = woman
nice one made me smile

Hawww! What about the global proverb "Unlike attracts" ?
Two people with same orientation of the choice with an angle α are together!

Hahaha...Sadiya...ROFL!!! Hope the frog gets a kiss from the Princess;) Reminds me of my school days. Here i sit at 1 am, smiling and giggling, reading your post!

Hilarious.....liked the way you described the glasses of Laali...

Ha ha..Jhopu..where did you get this name...

such a cute write up...and delightful brand name twisting and supernam-o n so much more...you had me smiling right through it all...

@ alka- hehe its an original. thot nandu frst. but den dats too common n got no spark. hence jhopuuuu!

Oh!!You ignorant one..Sheldon Cooper does not look geeky to you..He is so geeky that Oxford might have to coin a new term for him...Ask som of your friends to enlighten you..Or better stll see for yourself..the series is a nice watch too

hey, the way you give minor details is impeccable! i am inspired really! well, what happened to jhopu later?:)

Abhicake Makkhan! :D
I hate that actor, good to hear a new name for him :P
I am amazed by your imagination at naming characters... The word Jhopu is tuck in my head forever. :P