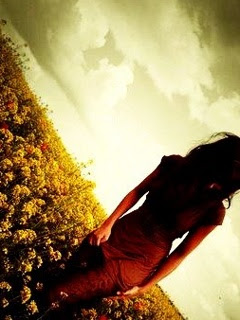 This post is written for Blogeshwar and Anubhooti.
Like a tiny shard of glass on the floor in a dark room.
It decides to spare your feet nine on ten times. And then in one moment it changes its mind. A small little pluck and it severs your skin. You scowl and crib, at best ignore. It gets provoked at your neglect and probes deeper into your flesh. Gnawing and tearing apart layer after layer. No, it’s not a parasite. Hell, it’s not even human. But it has a goal. For the want of hurting you. For the want of watching you bleed.
Do what now.
Finally you care, eh?

He loved her. Dearly.
She inspired him. Every time she cried for help, every time she struggled to endure his gaunt thrust, every time he hit her. Every tear she shed. Each suppressed sigh. It made him feel powerful. Like an additional life was surged into him as prize for what he owned; what he felt made him a distinguished man. Neev, a gentle Delhi artist with a charming personality, some said.

He looked for reasons to inflict his love on her. Every time she dosed off in his presence, every time she outstretched her hand baring her fair skin to so much as a beggar, every time she set foot out of the house. And sometimes when he found no reason well he just trashed her anyway.

The docile wife she was, Shaira loved him too. Loved him for fear. Loved him, for she was supposed to feed his ego. Loved him for she didn’t know what else to do.
Hers was a bruised coconut, but well there was no door to resonance, you could tell. To think, the bruises surely didn’t hurt so much and fairly soon even disappeared. Ok a little harsh maybe. But a marriage is what you make of it, isn’t it?

And then one day when he came home, the woman behind the perpetual ghoonghat sat outside the ground floor apartment with her hair, the colour of a flame, blazing open and a song on her lips. Shocked, he flew into a rage and pulled Shaira by her hair. She laughed and pushed him away so he toppled over the pots outside. The neighbours stared at this new circus. For the first time were they seeing the Painter Baabu’s wife and she sure had more intensity than imagined from her thus far submissive image.

Fuming he went inside. Well the woman was going to pay for this. Half an hour later she walked in as the same meek wife he had known for the last five years. You can be sure he beat her blue for her audacity.

This continued for days together and each day as Neev returned home, Shaira’s new loud avatar greeted him. She ignored his taunts and any action from his end would ensure his head between the pots. Sometimes people spoke of her yelling at vegetable sellers with her hair open, sometimes roaming about the streets like a mad woman laughing all the way and all of a sudden things would change. She wouldn’t know what had happened to her or how she landed in a certain place, almost like woken from a deep slumber.

‘The woman is possessed’ was the verdict given by Hakeem Saab with elaborate pleas of taking her to Mira Datar, in Gujarat, the place that healed possessed souls from evil spirits.

Neev ignored it. However when no medication worked for a month and his next project slated for an art exhibition was in Gujarat, he decided to pay the place a visit. Truth be told, he was quite fed up or more aptly said, scared of the woman his wife was turning into and wanted to get rid of her.

As they reached Mira Datar, Shaira shrunk even more from terror of what was likely to happen. The sight of people doing abnormal things alarmed her enough to want to run away. Firmly, Neev took her to the Baba and after a 5 minute long conversation it was decided, she be left there for a couple of months. No resistance helped. She wailed and pleaded with him to not leave her amidst the shady looking strangers. And when that didn't help, she begged. A roll of unheard shrieks, tears, stammering and vulnerability she was, when he left her all alone.

Perhaps he would miss her abused agonising cries.
No, certainly not. He didn't need a retarded woman for a wife.
He smiled at the prospect of how well his paintings would do at the exhibition. The fruit of his labour couldn’t be anything but saccharine.

He opened his case of paintings as the train left the station to find a whole lot of ash within it, with a crumbled note that read-
'The aroma of freedom.
It wasn’t in your nature to bend.
It isn’t in my nature to break.
Oh the ash. It’s what you made of my life and I made of your dreams.
That’s just karma, baby.
Love,
Shai!'

Posted by Sadiya Merchant at 9:33 PM

Nicely written story. Women like Shaira submit themselves to domestic docility and i do hope the average Indian housewife finds a way to break free!

A very wonderfully written post Sadiya. A domestic violence of such a magnitude and bearing it for someone's sake is quite a thing.

An inspirational story for all women subjected to domestic violence :)

The last few lines were awesome..and of course the post too..

The post has a poetic kind of feel Sadiya :)

@ niveditaaa- yea but it is a sad reality dat most women in such situations r rather helpless n don hav an escape route...especially in our society.

@ tan- hehe wel i think dats a tall thing to say- thnk u.

@ dhiraj- d nice grl dat i am, i wont say sumthin crude like- buhahaha i wrote it frst. instead ill tel u, mayb u shud try puttin forth ur take as wel. wud make a gud read :-)

I was really touched by it. Glimpses of the Movie 'Tere Naam' is coming in my mind when i was reading your post however the two are completely different.
Very beautifully written.

You now have 1 more follower.

the moron deserved it & much more!!

what goes around comes around...

Sadiya you really know how to spin a yarn. It was gripping, each line loaded with emotions. Absolutely loved it.

I agree with BA... Poetic and awesome.. Here is my cute tune on nature

what should i say??.............. a powerful story with a quite a natural ending.....i mean what else a a women subjected to violence could do?...use of words and narration is really nice....was glued to while reading

@ the critics- oh wel dis area, so far as ive read frm ur end is really ur forte n sayin dat is very flatterin, thnk u :)

Very True.. Awesome.. and Legen - wait for it - Dary, Legendary..
Loved reading it (as always).

:) coming after a long time and beautiful story ....well played with words dearie... you don't know that you are awesome :)

True, the theme was great...but what I really liked was the way the story flowed. Never too stagnant, but not intentionally fast paced. Pulled be till the end. You write beautifully :)