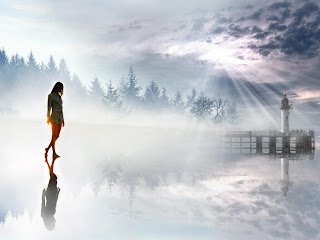 Every time Nysa’s father introduced her to a striking gentleman from a royal family, in the hope that she may approve one of the many eligible bachelors presented, her mind raced back to one familiar face.....one familiar name, Marquiz.

Each of the many men she met, were full of graces, achievement and chivalry. They opened doors and pulled chairs for her. Each of them was a cut above the other. But none of them held her gaze. Either an ease of familiarity or a mystique in personality was what lacked. But then she wasn’t quite sure of what she wanted in any case.
Must the heart always wrench for the unattainable?

The only daughter of the king as she was, her father was anxious to find a fitting groom who had the capacity to hold the reins of an empire into whose crafting had taken up his entire life. As each father, poor or rich, he too wanted his daughter to have the best of everything. She was free to choose from any kingdom, any man, irrespective of his class or standing. A princess, she was after all!

She had seen him exactly three years ago, when she accidentally chanced upon a less frequented passage in the castle. He was oddly different. Something that spoke of power in his eyes. Something regal in his posture. Something she was unused to seeing.....Enigma?
As it often happens with an infatuation, his was a face she couldn’t forget for some time. The fact that this ‘some time’ extended for a couple of years was alarming. Even worse was the idea, that she unwittingly took each opportunity she could get, at learning every little detail about him.
His name, his family, his gallantry, his story.

As days passed by and Nysa rejected each alliance that was brought forward, the king started to get more apprehensive. He demanded an explanation but she chose to remain silent. What would she say?

That she had fallen in love with the picture of a man who had died a hundred years ago?

It was so ridiculous to even say it; believing was quite out of question. There had to be a way of forgetting that face.

And then one day she had a dream. She dreamt of him walking towards her. His demeanour was a lot different from the picture. But it was the same person alright. All she could make out was his face in the fog and as he approached closer, she caught the spry in his step, the warmth in his eyes and the most disarming smile she had ever seen.
She held his gaze and walked at an unstrained pace towards him. Suddenly she tripped over her dress....One smooth scoop and he helped her up, holding her hand for a second. The next thing she knew, she woke up with a start.

Now the thing about her dreams was.....They came true.
All of them.

i was simply moving with smooth read, but all of a sudden there i found a caption..."To be continued..."
will be looking for the concluding part...

And now the thing is, her dreams come true, every dream.

@ blasphy guy *hehe ur username makes me want to blink a coupl of times*- wil post the sequel soon :)

Very well narrated. Waiting for the next part. Keep up the suspense.

since when you started writing all romantic stuff? :P
But it was a good read :)
keep writing

now, i have to tell u yo have a flair for narrating stories...completely engrossing..
personally, i imagined ( kinda happened too ) something similar with me..could never pen it down properly, u have provided me with a idea :)

@ sarah- hehe wud louuuve to hear ur story!! i hope to c ur idea penned down real soon n m sure ull do grt!
wel dis is more of a fairy tale thingy so m nt sure hw wel u wil connect wid it...if however u like it, its urs! aftr all a princess mus hav evrythin she likes :)))
hav a wonderful day ahed!

wow.. its good to read something so refreshing after so much of time. i was yearning for some romantic stuff to read.. :D thanku for it :)
now going to part two :)

awww! thats so very sweet of u..and the way ur story is moving on (just read part-2) i would be glad to have it ;)
I m not good when it comes to romantic stuff but would definitely try and pen down my story sometimes!

PS : Even i have the same Question for muddassir, coz meine bhi yahi suna tha :P

Oh! truely engaging.. and awesomely written.
Superlike. You certainly have the knack to tell story.. Will read rest of the story and posts after my office.
Keep writing :)