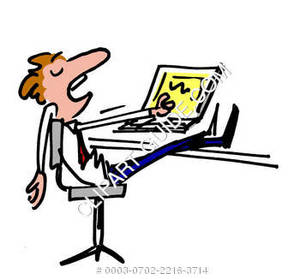 No, no this isn't going to be a feminist write up where I will trash the ladka log.......just an attempt at stating their hatkey-ness.

Up and counting please. Presentingggg all the weirdness about guys that I don't get......at all....at any level...and in anyyy circumstance!

Disclaimer- This is a sole observation of the guy folk around me and does not generalise, so kripya don't be offended. (Blah! Not really...sab aise hi hai :P)

What's their obsession with hair?- Mosttt of them I know just stand in front of the mirror and keep doing something something to it. Chalo no problem....but then at the end of that 'something' wouldn't it be justified for the hairstyle to look at leasttt 1% different? But na ji na! It looks exactlyyy the same! And when that doesn't work, they try stuff like hair gel (Oooh those 'Set Wet' commercials!).....Here's how it appears in my vision.......door se it looks like you have used uttam quality ka coconut oil.....and when you touch it, it's sooooooooooo sticky! Yikes! How can people put this stuff in their hair? Or maybe my fashion sense is not good. (Yaba daba doo. Nah! Can't be that!)

Driving is all about manhood- Seriously did you know this? If you want to take revenge on your ex, this is the sure shot way to get it done. Tell him his driving sucks.....My guess is, that will leave him scarred for life.....Ok maybe that's a bit too much....but then so is this emotion....Every guy thinks he is the best driver in the world.....And nope it doesn't end there. He also deep down thinks that all women drivers are the biggest bane to traffic etiquette....if there is a traffic jam and a woman is the cause, you can mostttt certainly catch them rolling their eyes. Course, if the jam is due to them, then that's just cos they got plain old 'unlucky'. Men!

Asking for directions is the cheapesttt thing to do. Someone put it in their head ki if you ask for directions, then that means you're actually saying.......I'm so dumb...I have no life.....I can't even find the road by myself....I want to die with shame.....Why else would it be so much of a problem? And when the ladki log offer to help, this is what we get 'Shhh! Will you please be quiet!' Is that rude, or is that rude!

And what's the deal with ringing the door bell so many times? From my brother to the sabzi wala to the postman.....bas no patience at all baba! They just ring and ring and ring until you think you might go crazy or deaf. Why is it so difficult to understand that if someone ain't getting the door, its cos they might be in the middle of something important? In the washroom? On the phone?? Kitchen on fire??? Arey bhaai kuch bhi ho sakta hai na!

Another thing is their obsession with news. And course I too believe it's important. But kitna?? All day long??? I remember when I was a kid, my dad would watch soooo much news that I grew up thinking it's the only thing that comes on TV and became wary of the idiot box itself!

Everything is sexy. If you accidentally find yourself in the middle of a place with too many guys, that is one word you're going to have to get used to....cos besides, girls.........there's cars, bikes.....once at a friendly cricket match I even heard people cheering 'sexy shot' for a sixer scored.......My reaction- ???? Uhh usme 'sexy' kya tha? No I didn't say that! Mad or what!

Lack of shopping skills. When you go to a shop to buy something, you are obviously going to check out all the stuff available and pick the best. Makes sense? Now if you don't like anything, you will come out empty handed. Ok na? But nahi. If the salesman has taken trouble to show it to you then the guys ka manual says that you mustttt buy something! Anything really. Toothpick bhi chalegi. Main poochti hoo why? Isn't showing stuff his job? What's soooo embarrassing about not buying anything?? Free main to nahi de raha na????? But no. To them it's apparently oh so I'm- not-coming-with –you-next- time-ishhhhhhh.

Then there is a lot more like this whole ritual of never washing clothes, being over protective of your behna like someone is just waiting to kidnap her.....could go on..... but I suppose enough said.

And course, the point in question, what do they want?
Putting it in one of my fevretesttt Aastha tv pravachanist's....Sri Sri Seinfeld-eshwar Baba ka words,

"Women know what men want, men know what men want, what do we want? We want women, that's it! It's the only thing we know for sure, it really is: we want women. How do we get them? Oh, we don't know 'bout that, we don't know. The next step after that, we have NO idea. This is why you see men honking car-horns, yelling from construction sites. These are the best ideas we've had so far.. The car-horn-honk, Is that a beauty? Have you seen men doing this? What is this? The man is in the car, the woman walks by the front of the car, he honks. This man is out of ideas. I mean what is he expecting? For the woman to stop and say "Hey you honked at me .. Ahhhh that's so sweet .. I never knew you felt this way!

The amazing thing is, that we still get women, don't we. Men, I mean, men are with women. You see men with women. How are men getting women, many people wonder. Let me tell you a little bit about our organization. Where ever women are, we have a man working on the situation right now. Now, he may not be our best man, OK, we have a lot of areas to cover, but someone from our staff is on the scene. That's why, I think, men get frustrated, when we see women reading articles, like: "Where to meet men?". We're here, we are everywhere. We're honking our horns to serve you better! "

Credits
Go to http://www.myntra.com/ and check out t shirts for men! Also visit the
largest community of Indian Bloggers at BlogAdda.com
Posted by Sadiya Merchant at 7:07 PM 27 comments: