Of Cruises and Sair Sapaata's 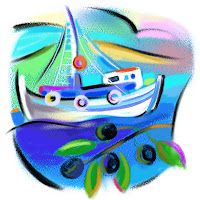 *I mean attitude kisko bata raha hai huh?*...Ok truth is I probably wouldn’t be able to afford them (not to mention it’s a complete waste of time), but then again there is this whole bhankas theory of ‘It’s all about the experience deekra’...so I decided to go for it. I mean the more affordable and short-cut version of a cruise (that is based on time management mantra).....if you still didn’t get it....I mean I went to Apollo Bandar and took the boat/ship or *I don’t really know what it was cos it seemed middle sized and nobody around looked educated enough to go all gaga over dimensions* from Gateway of India to the Ajanta caves.

To begin with, we took our seats on the fancy upper deck (after paying 10 roopyaa zyada for better ‘bhew’ ke liye)....and the majestic thing (like I said I dunno what it was) set sail...course there were the firangi’s who took a million pictures of the Taj (the hotel, dodo) and referred to a number of handbooks and read and pointed and posed and what not. Btw did you know theTaj is actually built ulta? As in the front side peeche and vice versa? Anddd hold on... the architect even committed suicide because of this emm error....I say how disgusting yaar!....Jaan deni hi thi to wife ke liye deta no? Ek building ke peeche?? Plus nobody can even tell the difference!...As you can already see my general knowledge from the trip stands visibly enhanced.

Coming back to the ‘cruise’, once we were steering through the not so clear waters, 10 minutes down and it started to drizzle...which is actually a good thing...I mean I can totally handle it....nice weather and all....and I must say the firangi’s were very well equipped for the rain. There was this lady who actually had a raincoat made of polythene! Yep this is where you heard it first. When we gareeb Indians are busy typing blog posts, these hard working phoreners are busy cutting polythene to match the size of their neck and hands. How cool! We never even thought of it...this is probably why we still are a developing country!

And now from phorener ben’s, over to the baba log...Yes I’m serious there was a baba too...all dressed up in saffron and rosary’s...anyway this guy wasn’t the regular baba, he was a high maintenance baba. How do I know? Easy! Cos all the time it was raining, there was this poor chap holding an umbrella for him (and simultaneously getting drenched)....anddd the baba was busy talking to another babu who didn’t have an umbrella but had to pretend like it was all ok. Sad no!

Oh yes the trip....one facet that I had completely overlooked was that a cruise actually meant water all around you and absolutely nothing else in the way.....Now I know there are people who feel the serenity and peace emanate from within themselves when one with nature .....


But blah! To be in the middle of soooo much nature is really not my thing....And then the worst happened...I got bored!! Same ‘bhew’!! Same rusted looking *humongous fatso type* ships. Same murky looking water ....Anddd I got hungry too!...*they didn’t have anything on board the ‘La Bombhay’ cos else I would have munched and happily forgotten everything*...And it started raining bullets so we had to come onto the ‘lower deck’ *10 bucks bhi wasted*.....needless to say everything went downhill from there.
After an hour and half, we reached ‘The caves’....Doubt. Didn’t they find any better place to put sculptures than inside a mountain, in a dark cave, bang in the middle of an ocean? I mean pardon me for questioning hundred year old frailties, but in my opinion that really is pretty dumb! I honestly fail to see what is soo romenteeekkk about the place. Apparently I don’t have any kind of taste for these ornate looking uhh ‘things’ ...so rather than be stuck in a dungeon ...uhh cave...and get claustrophobic, definitely better to get back.....

Another two hours of...... ‘Oh look itna water!! ..so serene...mmm bliss!’....and my friend got a bit sea sick (yeah my friends aren’t nature lovers either....birds of a feather?), after which we finallyyyy got back on land.....But that wasn’t without the ‘La Bombhay’ jerking me on shore with a whole lot of keechad uchaalna on my poor dress. (Surf Excel contributing too, by being ineffective in removing the stain, and thereby proving ki daag itneee bhi ache nahi hai.)
I loved it! Why? Cos this experience has been sohoooo good that I will probably never everrrr everrr dream of going by any mode of transport that take’s the aquatic route.....as for the money I was planning to save for a Titanic look alike...well I’m just going to have to blow it in the mall now! Ahh well! I think I’ll survive! :)
Posted by Sadiya Merchant at 11:23 PM

manh sadiyaaa... i have been to bombay infact was born there but never been to those caves ..and by reading ur experirnce i think i ll nevvveeeer everr gooo thereee.. :)

this is news to me that the architect killed himself coz he built the taj ulta!!! hmmmm thats something really dumb to do...

Hahahaha! Nice! Well described and observed. I especially like the 'Hinglish' used ;)

I'm there as Avinash Agarwal. See if u can add, or there's still a problem!