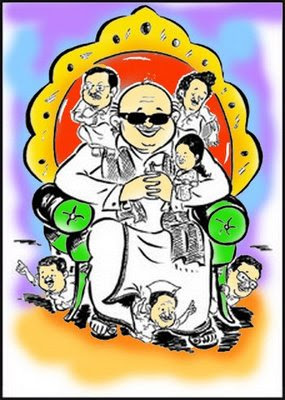 I read an article the other day by Chetan Bhagat with tips to the BJP on what they were doing wrong in their role as the opposition and one very valid point he made was, ‘Who is your Rahul Gandhi’…….as in the person who is the face of their party. Now since the BJP wala’s are yet to provide any certain answer on that, I thought of taking the liberty of making a few recommendations. You know na aise by the way help toh main karti hi rehti hoo. Right, so here goes my list of top 5 eligible candidates
Rakhi Sawant- And she is top priority. If you didn’t catch it on her fake swayamvar then Her Highness wants to be a politician in the near future, which is why this poses as the perfect opportunity. As for the BJP they will be more than thankful to have her around cos with her, comes free paparazzi ki guaranteed chatr chaaya . Plus, she can do ache acho ka thikaana and best of all, if by chance they do come into power, there’s every chance she might get assassinated and then we can have riddance from her forever and ever. Yayyy! ‘Clearly’ a win- win situation for everyone!
The motu Sprite guy- Remember those commercials with the guy saying, 'kutte ko pataa, ladki khudbakhud pat jaayegi?' Yep that’s the guy I’m talking about. With ideas like his, just imagine BJP kaha se kaha pohoch jaayegi. Added advantage being he has been with those African tribe wale log in his recent commercials so there is no telling what he could do if you messed with him!
Himesh ji- Oh I just love him. Kya acting!! Kya singing!! And now silky silky hair also. I am bound to believe that anything he touches is good as gold. Besides, he is better looking than anyone on the BJP team anyway. Advantage of having him is, the minute people start arguing in his presence, he can give dhamkee ki either shut up or I will sing ooooooooo in my nasal accent. Tadaaaa! Sab khamoshhhh!
Shiney Ahuja- Yep give it up for the man with hair that looks like it suddenly got burnt. Whatever be his past, he is popular and he obviously has a record for showing no discrimination among people of different income groups, phir chaahe Bollywood abhinetri ho ya domestic helper. Aise log aajkal kaha milte hai???
Chatur guy from 3 Idiots- Shorriee I dunno his real name but he sure seems a smooth fit in the larger scheme of things. For a start he doesn’t talk in shudh hindi so the vast majority can at least understand what he is saying and then he can give kaante ki takkar to Sonia aunty’s accent wali Hindi too……Perfectus!!
I hope this healthy change helps in bringing up the BJP team ka morale and rising over petty anti-democracy centric issues!

P.S- I would be more than willing to give a reference letter for any of the above mentioned diamond studs*

A funny post . It is the outcome of frustrations about our so called "Nethas".

a href="http://www.workathomeforum.in"> Work At Home In India </a

The sweetest blog I have ever seen.I am glad Google brought me here.I love writing and you are an inspiration...