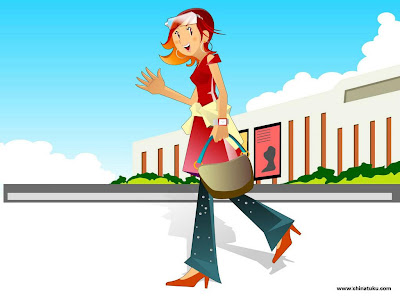 I just saw the movie Vivaah (Shahid and Amrita wala)…...and there was this scene of an arranged marriage where the guy meets the girl and does some ‘private’ main talk shalk….Doubt- Is it really like that? And then 20 years down the line, what will the girl tell her children about ‘How I met you daddy’?...... “The first thing your daddy asked me was…..Ji aapke kya kya hobbies hai?”…..Somehow that doesn’t seem like the right answer at so many levels……Truth to tell, if I were the girl I would be embarrassed, if I were the girl’s kid, I would be still more embarrassed!

So what if a girl doesn’t want all this……saying no (as in rejecting the guy) jaha tak I know is a total stigma and surely means you have some chakkar going on in the background…. so the best bet you have is to get the guy to say no. How?

Enter Sadiya- And this brings me to the point of this post- What are the things you can do to get rid of a random wannabe groom? I mean I know this sounds kinda shallow and sadly that is the truth yaar….I take cheap thrills in thinking nonsensic, non- happening, impractical and mundane stuff…..now that I've said that, I think we can move right on. Here are my top 5 ways where a NO from the party of the first part is totally guaranteed (you don’t get any money back btw). Listen carefullyyyy and you can even try this at home….just don’t come back to me if you don’t get desired results.

Take 1- Lipstickk- Yeah arranged marriages ensure that the meeting session witnesses the girl to be overdressed in a teeny way short of being a bride….so obvious si baat hai you would have plenty of make – up going too…..In this situation here is what you need to do…..Crib about everything……the clothes, the jewellery, the hairstyle…everything….to a point where the gharwaale get bugged….and just when they are about to touch the make up front……make a sad face and say…. ‘Can’t I at least do this on my own?’….Chances are they will give in……if they don’t, then go for a last minute touch up and execute as I say……Pick the darkest shade you can find……red, orange and purple are the new hues…..apply a handsome amount and if you want best results then you could even try all three together…….Thennnn make your grand appearance…..but haa with your head down….and then at the meeting veeting time, look up at the guy with a full on close up toothy ‘say cheeeese’ wala smile…..he will be shockeddd and probably even scream…..So there! Not only do you get a NO and a fresh lease of life, but you will also manage to be on his mind for a longgg longgg time! Tadaaaa!

Take 2- Display your poor conversation skills- When I say that, I mean talk in English with all the wrong pronunciations so you come across as a gawaar desi girl……For instance say iskool for school….and keep repeating it over and over……like this
“I had many friends in iskool but now they are all in Amreeka…..I think it’s near Kaneda no?”. He will be disgusted….and then the thought of introducing you to his friends will enter his mind followed by an immediate NO. Huh! Mission accomplished!

Take 3- Put some chalk powder on your hair…..and you need to be very neat with this so it doesn’t all end up looking fake or planned…..then when the moment of truth comes by, just lehraao your silky silky hair with all the graying in it…….(ensure that the other party notices)…..yep that’s about it…job done! No one wants to marry a premature aging woman! What follows can be left to providence. Easy!

Take 4- Don’t cooperate with the conversation…..talking to a stranger is a tough task and so much harder when the person opposite won’t get on……So be the tough nut here……answer every question by saying “Maybe” or “I don’t know” and give a least interested look that reads…. “Jaldi karo baba”…….Somewhere down the line he will get the signal, get frustrated and give up…..and there! Strike!

Take 5- Talk about your other friends……for instance “My friends….Neeta, Renu, Priya and Rohit”……and the minute you say the guy’s name give a sad expression, pause for a minute, clear your throat and then quickly say something irrelevant at top speed so it gets visible that a broth is cooking.
You see the thing is, however progressive we get, arranged marriages bring us back to basics and the guy in all situations wants an impeccable ‘ji huzoor’ type begum….. another hero in the photo frame hardly seems like the talk is going to make the cut. Exploit this instinct and baby you’re home!

Having said all of the above, if however his good looks make you change your mind…….roping in has just one take to it.
Take 1- Smile (wo sweet innocent wala)…..He’s yours……If however he isn’t…then he definitely qualifies to be called a ‘retard’ to your friends……..
Chaaho to sab kuch hai aasaaaaaaaann!
Posted by Sadiya Merchant at 12:09 AM

great topic with bindass appproach with a great social message too... neat yet elegant and super expressions with mixed blend of humour...and definitely not only girls but i guess boys will like it too... because hum hi hum hai toh kya hum hai and tum hi tum ho toh kya tum ho... for a modern society girls and boys need to be very much equal i guess...

@ anuj- hiee! lol. thnx so much!
n yea even if a cent percent equality aint possibl, at least grls shudn b treated like showpieces!!

That was show of pure evil genius..I do hope you have found someone already or some poor chap is going to be at the receiving end of practical jokes and scar him forever..

I just came across your blog while blog-surfing. You have a wonderful blog and your witty and humorous posts had me in splits. :D

Hope to see many more such posts from you. :-)

I did a small take on arranged marriages sometime back too. Do give it a look.

Came across this blog while site hopping. Loved it!

Take 5 is classic :) and I love the spirit and the sense of humor.