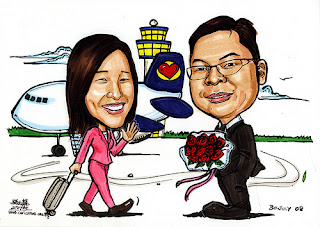 Ok not saat, just one maybe. I guess that’s how many samandar’s there are between India and Saudi Arabia. And yepppp, I’s the going’s the home sweet home’s for the nice longgg chuttiiiii next month!

To begin with, I’m one of the world’s worst travellers. I don’t mean that I start screaming just before the take off or anything, I mean the overly hyper kinda behaviour where your intestines start sprouting like ActII Popcorn on the inside for the most part and you anticipate all the world’s worst case scenarios.....Omigod I lost my passport! Omigod I forgot the ticket at home! Omigod what’s that sound- noooooo puhleeez I don’t want to dieee!!! Yes for real. No kidding there.

Now with all that paranoia you might think I am very careful with the udaan formalities and believe me, I am! Somehow though, for some unexplained reason, I have become poster girl for travel related muddles. But I’m learning.
I could take this as cue to tell you about the frantic dame who met an awesome prince except emm well, I didn't! And the one time I did, he couldn't spell out till the hopeless end, how meant to be the two of us were.
Bleh! I digress.
Anyway, so here’s a couple of things I have already learnt from the side-artists I've met on my travels coursing a span of less than 2 years. I figured, that still is second best.

Story *starring miss kind lady* where i learnt the importance of big golden Godrej locks with big silver keys.
It’s like this. I once had an automatic lock on my suitcase. You know the one where you have a code to remember? Right so far so good. Now the woman at the baggage screening sez she wants to check out all the treasures inside. Ok no problem. So I jingled with the code and set forth to open it. And Haila! What happens? The lock wouldn't budge. Panic gong starts yelling, reaching higher decibel levels in my head with every second and in that frantic moment what am I to do? Redo. Redo. Redo. No luck. Bahhhh! Ok Deeeeep breath. Calm downnn. Try from 000 all the way to 999 and thennnn by some stroke of dumb luck THE woman *God bless her, she is sooooo going to heaven!* said never mind and allowed me to go. *Phew!* And what am I supposed to say next? Thank you??? Nah! Instead with all the tension in my head this is what I say instead,
‘Are you sure?’
*dies*

Another Story *starring the awful meanoo Sunsilk wala's* where I learnt to never ever ever everrrrrr carry shampoos.
Now you may think why in the world I needed to carry a shampoo in the first place. Allow me to explain. I was going to my naani’s place and pretty much our entire khaandaan was going to show up as well. So I gave some sound advice to self. I said, ‘Hey Sadiya! Where are you going to find the time to shop for a shampoo? Take one from home.’ Thik kiya na ji maine?
But nahiii. The bottle BROKE!!!! Into two pieces!!!!! In the suitcase! To make things worse, thanx to the suitcase tagging along with me, I smelt like a shampoo ki DUKAAN, all the conents of the bag were ruined and the worsttttttesttttt part being, I had to wash the bag when I got home and the ‘jhaag’ filled up the entire bath tub. Also, the high its perfume gave me, went straight into my brain. Neverrrr use the yellow wala Sunsilk mannn! Can't even manufacture strong bottles so what kind of strength is it going to give to my hair????
*smug*

Voila! One more story! *starring this time our uniformed men in green* about how holding an aircraft hostage can be pretty cool.
No, my aircraft wasn't hijacked. It’s like I forgot my handbag at the security check and given my kamzor yaaddash, I remembered it only 5 seconds before they closed the aircraft door so I went all, 'Roko rokooo.... chain kheechooo!!!' kind, after which, what followed was a pretty fun experience. They took me in this van like vehicle with armed macho police guys and back at the airport where some responsible folks had already opened my bag, opened my wallet and had my name yelling in the speaker! Whooopieee! I have never felt so like a Miss Popular! And as they escorted me back, I realised the flight had been delayed a good 5 minutes just for meeeeeee. Yayyy! How cool is that! Let me tell you mere liye to generally Auto bhi nahi rukta! :(
The only dampener was the other passengers glaring at me. But hey! Who cares! Ye india hai boss. Chill. As long as no one's dead, Sab chalta hai!
Keeheee :P

Ok, ok last story *starring the invisible Genieee!* giving gyaan on why you mustttt buy only dhinchak bags.
Really! And I mean traffic signal types. Now its not that I am color blind or anything, and believe me- When I put my luggage at the check-in counter, my bag was black. I repeat BLACKKKK- underline underline!!! But then suddenly at the baggage carousel it became blue, so obviously I didn’t identify it and waited for almostttt half an hour although it was rightttt mere nazro ke saamne!!! Honestly. Some things, you just can’t explain!

Those have been a recollection of my experiences thus far. Wonder how it's going to be this time. Maybe I'll miss my onward flight and then be put up at a fancy hotel so naturally that's where I'll meet my SOULMATE! *sapno se bhare naina* :o
Let me know if you have any of your own travel bloopers to share.


Credits
Indiblogger contest
Expedia- Now in India! Tadaaaaa!*my general knowledge is getting wowwie-er at the exponential uber cool rate of 60 seconds per minute. Uhh ok I saw the ad on TV!* These are the hi-fi people giving away some seriously awe-jinga-lala-hooo-some stuff so check it out ASAP! And while you're at it, today is the last day so get clickingggggg.
Posted by Sadiya Merchant at 4:05 PM

1, 2, 4 happened with me! I always forget the code, so what I do nowis that I keep a same one for all the bags.
Gone through this shampoo thing, the only difference is that it was a facewash and once a sanitizer also.
You say that you are not color blind but I feel that I am! I get confused with my bags in the same way!
Enjoy your stay:)

That made me laugh so much!

You have a great sense of humour !

oh wah ji wah swaad aa gaya ... enjoyed it so much i am laughing . I have done the forgetting of the lock of the suticase but in my case I was in america and they BROKE the lock to check if i was carrying anything .. did they find anything NO.. I had ot buy a new suitcase.. and that to in DOLLARS so not happy over that ..


I am always praying the bottle breaking doewnot happen with me for when I am coming back from India I have to buy at least 3 bottles of whiskey my favourite JO yahan UK main nahin milti .. after all boss indian daroo indian hai .. and what can scotch do in front of it :)

Great to see you back in form after a long time. :-)

I have my own share of stories and can totally relate with yours. :D

About the shampoo thing, I always make sure to double wrap anything liquid inside plastic packets. :P

And that ghastly feeling I have everytime I hand over my passport to the person-in-charge... expecting sirens to go off and security personnel erupting from all sides to pounce on me... :P :D But they just return it back to me after a mere glance up and down as if I was the most boring thing ever to happen to them :-/

All the best for your holidays. Have lotsa fun ! :-)

Have a good time Sadiya!

Hilarious !!! Was laughing all the way till the end. Looking at me even my colleagues at the office started laughing !!!

LOL!!! You are back with a BANG!!! I once broke an eau-de-cologne bottle in my bag and was smelling like one HUGE cologene bottle for a week:P And locks! My, my...I always lock it with 786, may be after all that "hero" khaidi numbers stuff.It got opened once enroute, no idea where and the lucky b****** got away with half a dozen lacy undies:P Imagining his wife donning them...Yikes!!!

Hahahahahahahahaha alaaaa ROFL!!! Girl, u rock!!!! This post really made me laugh and have a safe, yet fun filled journey =D

Haha... looks like bloopers keep following you wherever you go. http://abhyudayadoses.blogspot.in/

Hahahahahahaha.
I'm glad everything turned out okay.
One thing, though. Did you finally remember the code for the bag? :P

Chain khincho! Classic! You gotta do one more post, the goodies you get are the sugary comments for that :) May you revel in praise on doing the Kamikaze asks tag :P You are tagged sis! http://coolkamikazecat.wordpress.com/2012/03/04/kamikaze-asks/

@ ovais- i did remembr d code bt once keyed d lock refused to open. i hav NOOO idea y.
n gues wat!
wen i was home, i had to break d zip n dennn wid d lock in my hand i clicked it wid 000 and wadduyukno!
D DAMN THING OPENED!!!

enjoy your time in india and hope you will share your adventures with us :)

I just came across your blog. I love your writing :)
Unlike you, I'm very careless when it comes to traveling. I'm always lost with my mind shut :P

Haha. I travel between India and Saudi Arabia as well. It would be fun to run into you on one of those trips. Heh. :-)

Did that Roko Roko Chain Kheecho thing...It is hilarious in retrospect not so much when it happened

God I hate it when that happens - the forgetting the code thing. Happens with email/FB?blogger etc too. Just wake up one day and zap! I don't remember what my password was!

any plans to come back to blogspot? :@

Oii, where are you?
Pliss to come back fast :(
xx

You are so funny.

Sunsilk part was the funniest. Maybe the shampoo was so strong that it broke the bottle? And no, I don't get paid by Sunsilk for saying this :P

Although I enjoyed this post thoroughly, I can't believe that you are such a melodramatic person in real life.

On a totally irrelevant note, I missed reading your posts and getting your mean, sarcastic comments on my blog. I'm glad to back here again. Aman ki bhasa, Asha. Whatever.